We present here an online version of Ivor Dainow’s history of the Zigzaggers published in 1997. 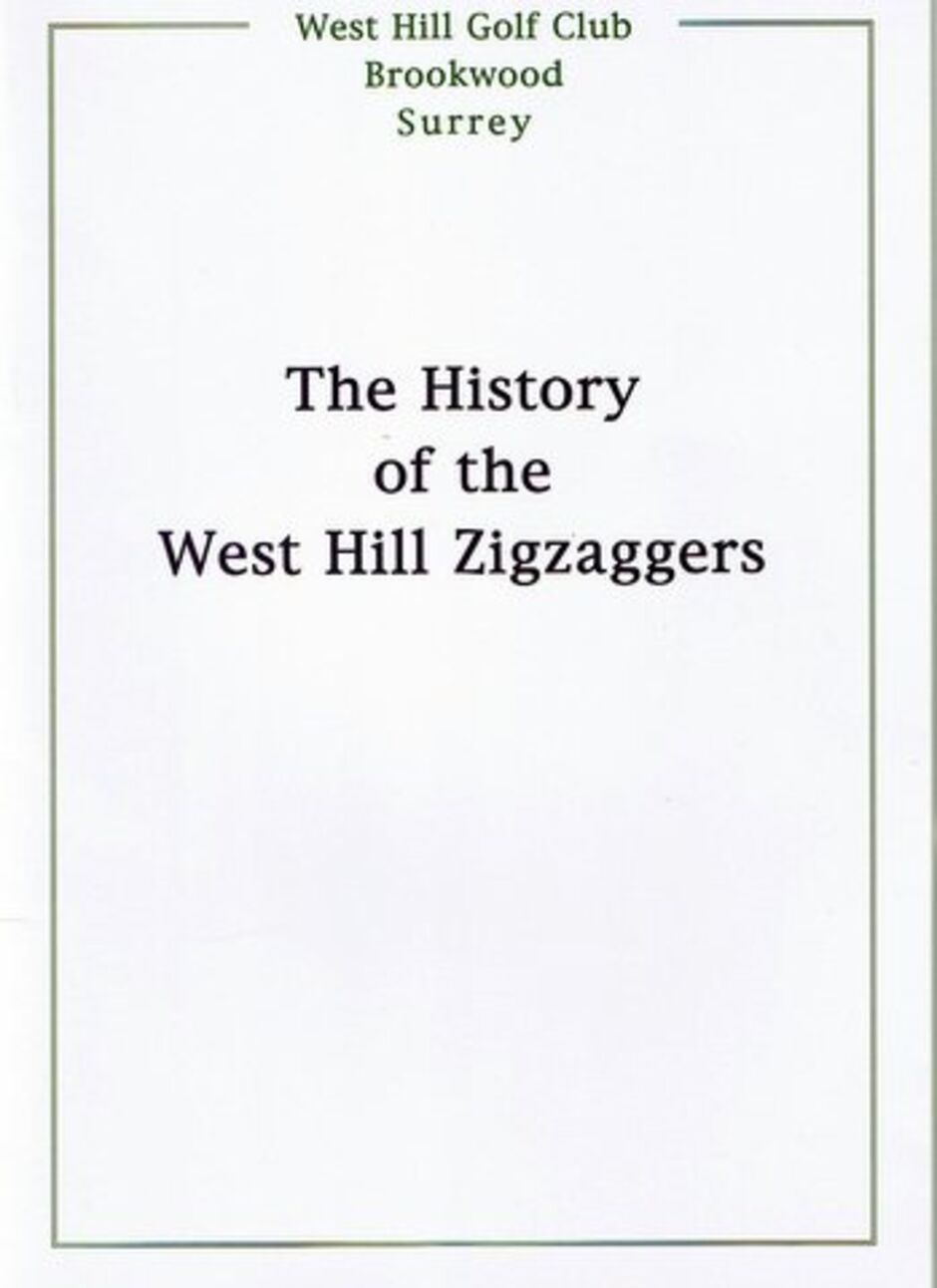 The Zigzaggers was founded in the Autumn of 1971 by Hugh Murphy following his retirement from working life. He noted that when he went to play at West Hill mid-week he regularly saw senior members playing singles or fourballs always within the same grouping. The absence of one member be it health. bereavement or whatever left the remaining member(s) shorthanded and needing to telephone others to arrange a game.

Hugh visualises a group of perhaps 24 retired members who would play regularly at West Hill and would draw partners prior to going to the 1st tee. This would ensure that everybody had a game and that there would be a social intermix among the group. He stipulated that the essential element within the group was that it was to be FUN – the capital letters are deliberate – and that the members would look forward to their twice-weekly meetings, pleasurable rounds of golf and amiability at the 19th hole.

Thus was born the originally named ‘The Old Zigzaggers’.

In 1971, unlike today, men did not retire until at least 60 years of age and it was decided that the criteria for membership of The Old ZigZaggers be restricted to ‘Retired gents over 60 years of age or who look like 60 years or over’.

Although It was originally proposed that The Old Zigzaggers be restricted to 24 members however, within two years of commencement there were 31 active members within the Group.

The first Old Zigzaggers Annual Prize and Penalty Competition was held on 14 January 1972. Competitors played a combined Stableford and Medal round off 16 holes:

The President Elect of The Old Zigzaggers was the competitor returning the lowest score in the Stableford portion of the competition.

Good scores on the Medal holes were penalised in that the competitors paid increasing amounts of money towards Ziggagger funds for low net scores. Similarly, the less bunker shots played in the round the higher the financial penalty.

A compulsory sweepstake (25p), for the Big Head Stableford winner was, until recently, included in the event.

In 1995 it was agreed among The Zigzaggers that a named prize be presented to honour the Founder – Hugh Murphy. Hugh was vehemently against a Cup but was finally convinced because of his love of horticulture to accept his name being associated with a rose bowl. The first Hugh Murphy Rose Bowl was presented to the Big Head Stableford winner in 1996.

Traditionally, an ‘Odds Table’ for President of the Zigzaggers has been effected. Originally these were true odds and an example for 1983 reads as follows:

The Stake was 50p per selection with a maximum of two selections.

Excluded from competing in the President’s section of the competition, but able to play in all other aspects of the day are Past Presidents, Zizgzagger Secretary and Treasurer and any member of the Board of West Hill Golf Club. The exclusion of the Secretary, Treasurer and Board members was initiated by Roy Hall when he was Secretary. Justifiably, he could not see why these persons should have additional responsibilities.

Zigzaggers Games
The Zigzaggers meet in the clubhouse for a draw of playing members on Mondays and Fridays at 0855 hr. Members play four- balls but if the number attending does not permit even division into fours, groups of threes and fours are determined. The groups of threes have priority off the tee in order to enable them, (hopefully), to get away.
The maximum sidestake on each game is 10p with 5p for the bye and an additional 5p should a bye-bye arise.
By tradition, only half pints of beer are ordered at the 19th. 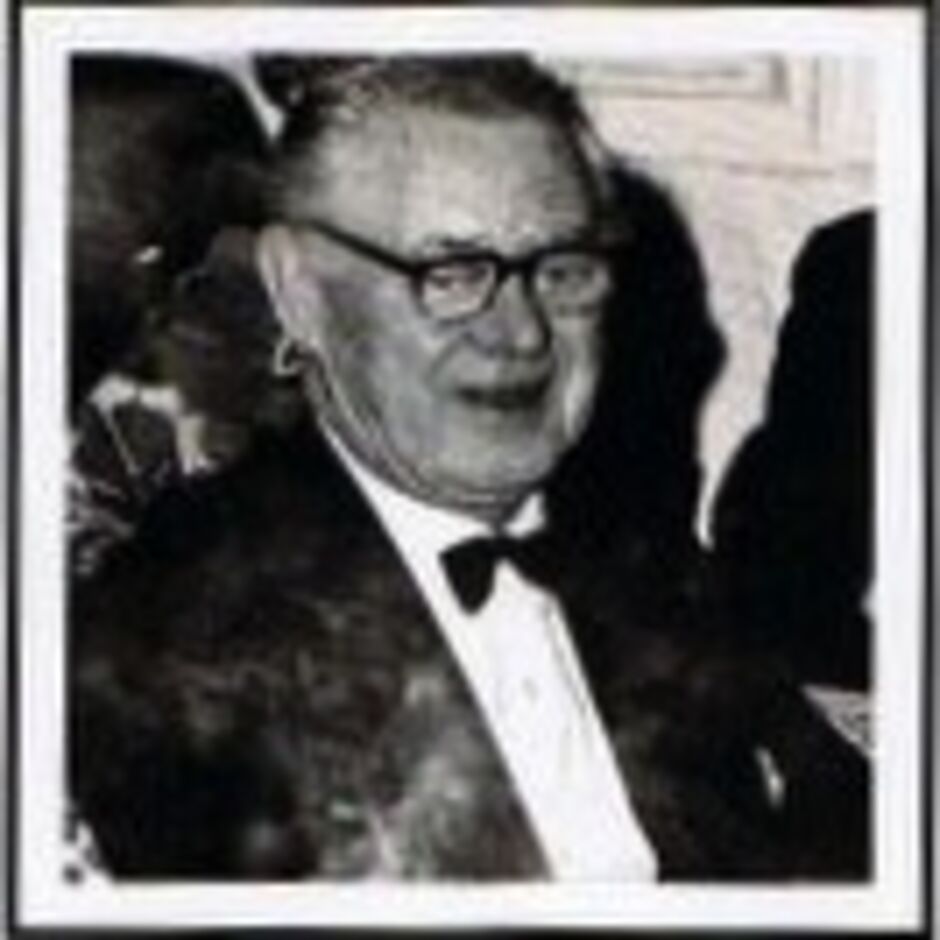 Matches against other clubs

One of the many delights of being a Zigzagger is the opportunity to compete at other golf clubs on the senior circuit. In all instances this is on a home and away basis. The first clubs on the circuit were Worplesdon, Woking, New Zealand, West Byfleet and Hankley Common. Subsequent years saw other clubs joining:

Apart from the Prize and Penalty Day. two major competitions are held during the year – the Frank Williams Tankard and The F C Brown Salver.

Frank Williams was a stockbroker and enthusiastic member of the Zigzaggers. In 1975 he donated a beautiful silver tankard for an annual Stableford competition over 18 holes and open to all Zigzaggers. The preliminary rounds for the inaugural competition were held at Effingham Golf Club with the four best scores going forward to the semi-finals and final at West Hill. A celebration lunch was held at West Hill for the winner and the tankard presented by Frank. The occasion was marked by Frank filling the tankard with port to circulate among the Zigzaggers in loving cup fashion. It was Frank’s wish that this procedure be adopted in years to come at each Final of the Frank Williams Tankard.

In 1972, at the request of Hugh Murphy, Johnnie Walker sponsored the ‘Still Going Strong’ knockout competition, providing liquid prizes for the event. Sponsorship continued up to 1985 when, for commercial and organisational reasons within Johnnie Walker, they withdrew.

The following year, David Chitty, who had two nieces who worked as secretaries for Tony Brown, suggested that he approach Tony to determine whether he would consider sponsoring the competition – proposing the title “F C Brown Salver” – to commemorate Tony’s father, a major manufacturer of office equipment furniture, who was for many years a member of West Hill. Tony agreed and David Wolff, then President of the Zigzaggers, wrote to Tony and received a confirmatory letter. Tony regularly attends the celebration lunch and makes the presentation on the Final Day. 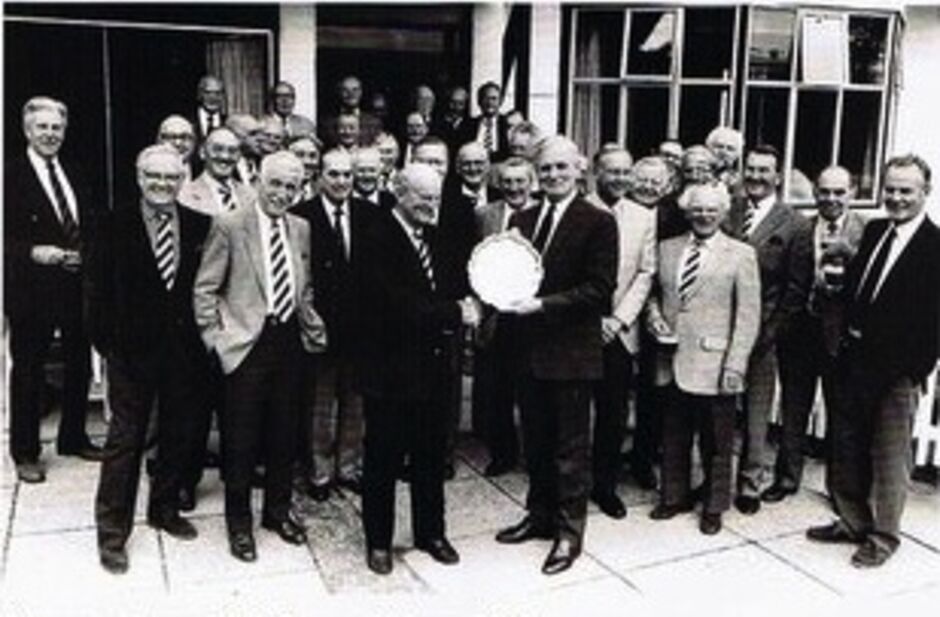 Names from left to right, back row:

Ladles Night
Early In the history of the Zigzaggers it was agreed to have a Ladies Night. The inaugural invitation bears recording:
Dear
For two years now you and the weather have showered blessings on our group of ‘seekers after fulfilment on the Fairways of West Hill’.
We recognise the loneliness and the sacrifice we burden you with on Mondays and Fridays, while we, by your gracious consent, hack our backaching ways through heather, woods and sand. We are mindful of that sacrifice and your sympathetic understanding when twice weekly we return to you, red of face, bright of eye, and exuding the fragrance of the 19th hole. It is therefore with great pleasure that we offer you this small token of our gratitude in the form of a Zigzagger Ladies Night.
Yours sincerely
Murphy for all Zigzaggers
(Compiler’s comment: dinner for two including wine = £5.50)

For many years it was traditional at Ladies Night for every Zigzagger to bring along a ladies’ gift – frivolous or useful – the value did not matter. The item had to be gift-wrapped and anonymous. It was placed In a box on arrival and the ladies randomly selected an item.
The President of the Zigzaggers has specific duties for Ladies Night:
Book the band and arrange payment through the Treasurer
Invite new Lady Captain and partner
Invite new Club Captain and partner
Invite Club Secretary and partner
Provide table decoration for all tables
Give appropriate post-prandial speech

Officers of the Zigzaggers
The positions of Secretary and Treasurer of the Zigzaggers are not roles to be taken lightly. Involving much work and not a little frustration. Holders of these voluntary offices, listed In chronological order to date are:
Secretary:
Derrig Gwyer-GIbbs
Boyce Platt Dick Kettle David Wolff Roy Hall
Alan Godfrey
Treasurer:
Ken Standaloft Bill Kocher
David Chitty David Schafer Frank Hughes
Finances
Annual subscription for membership of the ZIgzaggers is now £15.
Lunch on Prize Penalty Day is paid from Zigzaggers funds – all other lunches and functions are paid by the members.
In 1996 payments made to West Hill Golf CIub for Zigzagger matches and functions totalled £6750. As a guesstimate, bar spending by Zigzaggers throughout the year is approximately £4500. thus the benefit to the Club totals about £11,250 annually.

The following photographs were not part of Ivor’s History of the Zigzaggers.

This one shows the very first presentation of the salver in 1986 to Bruce Booth-Mason who receives the trophy from Tony Brown. 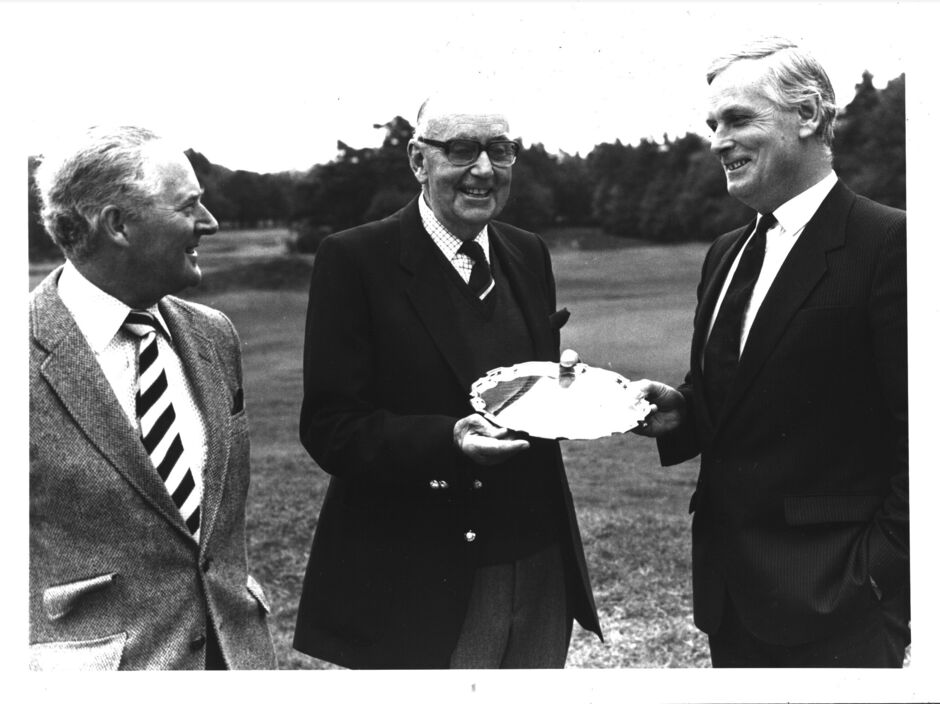 This one shows the presentation of the salver in 1993 which should mean that the winner was Bill Parke. Thanks to Keith Ellis for providing this photograph. 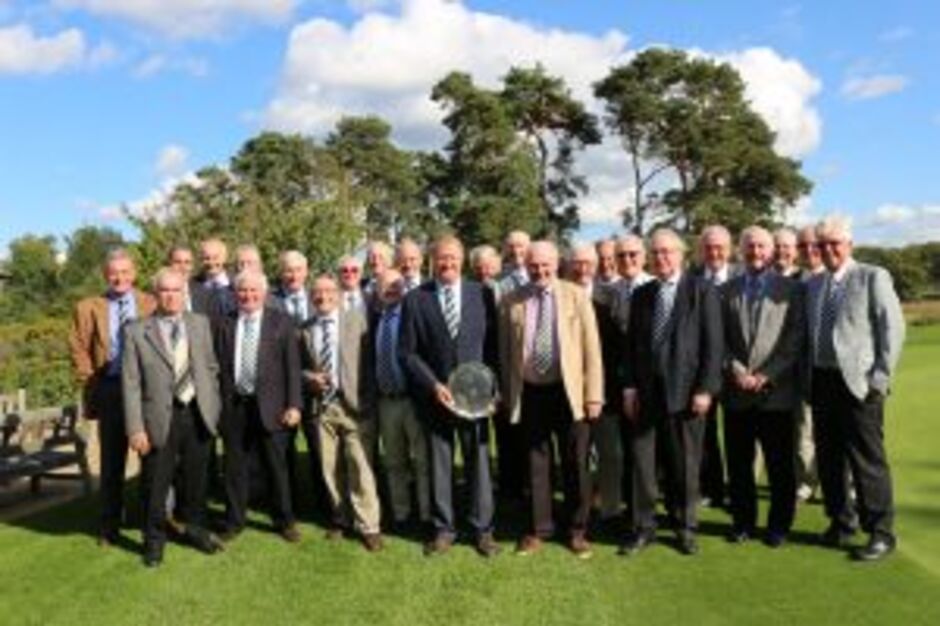